Tanzanian culture is a delightful mix of influences with over 120 tribes. Tanzania is one of the most culturally diverse countries in the world. From the tall graceful Maasai warriors, the ancient ways of the Hadza bushmen, the resourceful agricultural practices of the Wameru, the artistic talents of the Makonde to the Chaga farmers and traders. Each of the 120 different tribes in Tanzania have their own distinct ways of life but together, they gracefully unite to form Tanzania.

Languages:Over 120 languages are spoken in Tanzania, most of them from the Bantu family. After independence, the government recognized that this represented a problem for national unity, and as a result made the kiswahili language (Swahili) the official language. The government introduced it in all primary schools to spread its use. Kiswahili was the logical choice because a wide range of people were already informally using it along the coastal regions and it was a perfect language to help unify the country. 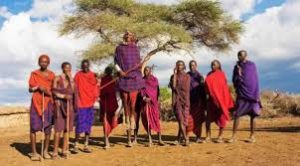 Today, a great majority of the population have accepted and fluently use Kiswahili and English is widely spoken as well. Furthermore Kiswahili has grown into an international language that is widely used across multiple boarders and is ranked among the top 10 international languages. Apart from Tanzania, it is now used in Kenya, Uganda, DR Congo, Zambia, Malawi and Mozambique to name a few.

Kiswahili is also taught in universities around the world such as; Harvard, Oxford, Yale, Cambridge, Colombia, Georgetown, George Washington, Princeton and many more.

Music: The music industry in Tanzania has evolved over the years. Due to the mixture of various cultures in Tanzania, native music is morphing into new music that is a combination of the old, new and imported sounds and rythms. Tanzanian musicians are among the the best in Eastern Africa. 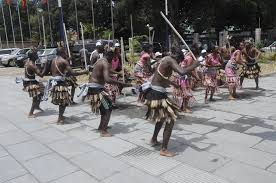 Traditional music instruments include ngoma, marimba, coconut shell fiddles, Filimbi ( whistles made of wood or bone) and Traditional trumpets made from bull/buffalo horns or ivory.

Native beverages include; Chai ( tea ) which is usually a breakfast beverage taken with Chapati, Maadazi, Mkate (breads), Ugali and/or Mayai (eggs ). Kahawa (coffee) is also another beverage. It is more commonly taken in the evenings, when the sun is cool and people are on the front porch, playing cards, Bao or just chatting. Many people drink coffee with Kashata (coconut or groundnuts rolls).
Other native beverages are specific to certain regions and tribes. These are; Mnazi/ Tembo (Coastal region), Mbege ( Kilimanjaro region ). There also various beers, wines and spirits produced in Tanzania. These include Kilimanjaro beer, Safarai beer, Serengeti beer,Konyagi, Banana Wine and many more.